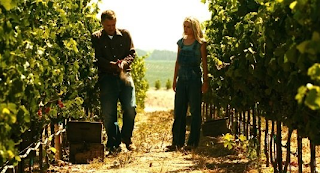 your heart? Do you know that feeling of general mediocrity, and the disappointing realization that you've just wasted hours of your life on something that completely lacks creativity or originality? I recently experienced these dreadful feelings during and after seeing Bottle Shock, the fairly well-reviewed wine movie that hit theaters Friday, August 15th. It's a film that plays more like a commercial for the beautiful California wine country than a feature worth repeat watching.

After reading these reviews and gullible-y swallowing them up, my anticipation was moderately high (I do have a slight interest in the subject matter). Although based on a true story, and a pivotal one in the wine world, the film is completely formulaic. The characters are not only one dimensional and poorly developed, they are complete caricatures. The "snobby French experts", the "humble farmers", and the "pompous Englishman" delve no deeper than the surface of these character types. The only exception is the part of Gustavo, the Mexican winemaker played by Freddie Rodriguez, who goes only slightly beyond the cardboard cutouts of the other characters. In Gustavo, you begin to get interested in his story before it's abandoned to focus on the primary storyline. For all of the main characters, you never get beyond the actors who are playing their parts. For me, forgetting about the actors acting enough to get lost in the story is paramount. It didn't happen here. 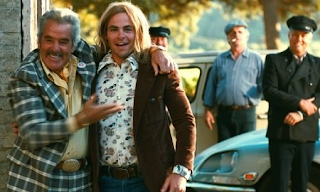 or this movie have been very generous. After seeing this film, I couldn't help but draw an analogy to the wine press and the points system that so many people blindly believe is gospel. This movie may suit some, who may prefer their entertainment to be very familiar or even reprocessed and mild. The same can be said for some wines, and the wine press will definitely give those wines great reviews also, especially if they follow the standards set by Robert Parker and Wine Spectator and are more modern in style instead of traditional.