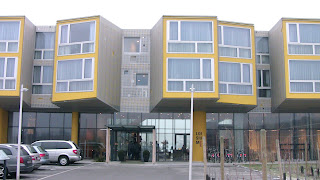 What if a couple of winemakers were up drinking late one night and concocted an idea to create an underground museum to celebrate the making of wine, where tourists would walk through the museum from the perspective of being a grape?
And what if the same two fellows roped architect Steven Holl from New York into designing a hotel for the museum, which he repeatedly refused to design, but after a bunch of wine Steven had sketched the hotel on a cocktail napkin before dawn? Meet the Loisium (loy-zee-um). It’s an interactive tour of wine, a museum of Austrian wine making history and a deluxe ultra modern hotel/spa. I got to stay there for two nights! 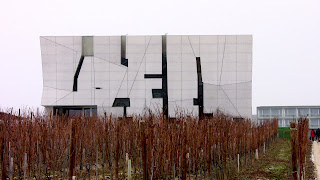 Located in Langenlois, Austria, the museum was built first. The problem was that: A) it was underground; invisible to tourists and B) there was no place to stay. So the vision to build a hotel and include the Aveda wine spa came to life. The museum’s welcome center and gift area has no regular windows and not a single 90 degree, true angle. The hotel won a major architectural award for its design. All I can say is you have to see it to believe it.

Mostly concrete with heated floors, the hidden bathroom, and the room service just for your bed comfort are fantastic. You can order a special pillow, a different mattress, various comforters, you name it, they accommodate. The breakfast was outstanding and I found one of my favorite food signs ever on the buffet.
With Mr. Karl Steininger of Steininger wines as our host, we got to know the late night/early morning crowd at the Loisium both evenings. His long drinking session reputation preceded him and we were warned. The second evening I went to sleep in the low digit morning hours, but several of the group never went to sleep and continued on with Karl tasting each and every barrel of wine in the cellars. Once you have tried your 11th tank of 2008 Gruner Veltliner, it’s a little difficult to taste 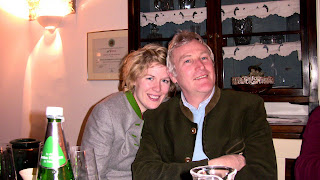 how it is different from the first 10 tanks. These guys weren’t even close to hungover yet. That would come around 3 PM that afternoon once the alcohol wore off.  In time we came to be very fond of the entire Steininger family. There were the daughters Ana, focusing on the red wine production, Eva who focuses on white wines, and Leeza who was the youngest daughter and still learning everything. We met Brigetta, the matriarch and the always jovial Karl. The Steininger estate not only makes great reds and whites, but also focuses on Sekt sparkling wine production in the Champagne method. We were treated to watching the disgorgement process and each of us allowed to finish a bottle of Sekt on the bottling line so that we could take home our very own personal bot

tle. [I hope to finish a video for you in the next month showing the process.] This was followed by a seven course dinner prepared by Brigetta and Leeza with seven different Sekts for each plate. One of my culianary/wine lifetime highlights will forever be the 2006 Sekt Cabernet Rosé paired with smoked trout and horseradish cream.

The family produces their Sekt only in the best of vintages and ages the bubbles for an extended period in the barrel or tank, then on the lees for just 1 year in the bottle. Karl explains that his preference is to “

taste the wine in the sparkling wine” and not the yeasty quality. They produce a vintage “Grand Cru” only in magnum and hand sign each bottle. The base wine is aged for four years in 2,000 Liter wood barrels made from local forest wood. At the Loisium bar we must have downed 4 or 5 magnums our first night. I knew it was good, but didn’t realize... 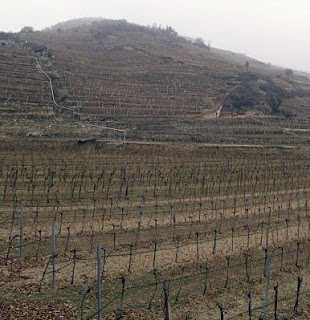 In between our time at the Loisium and the Steiningers, we snuck away to the Wachau region to walk the terraces with Martin Mittelbach of Tegernseerhof estate. It’s wicked cold as we depart the bus and Martin marches us up the hillside into the vines. Seeing the hills, the
terraces and all the surroundings, we now feel like we have seen both spectrums of Austrian vineyards. From flat to mountainous, this area has traditional stone walls surrounding special vineyards similar to Burgundy, France. Each “clos” carries significant meaning and often a price. This is some of the top Austrian wine in the world all around us. When we drive to the Mittelbach house, we cross the Danube river which has frozen in places. Martin says this hasn’t happened since 1986. We meet the father, Frankl, who now watches over the family operations, along with his mother Dita and sister Eva in a house that was former monastery. 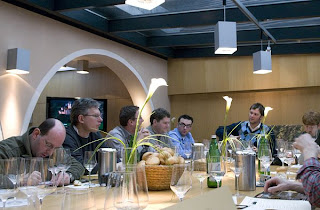 Back in 1970 Frankl produced straight forward wines, but today Martin has taken the winery to new heights using spontaneous fermentations, bigger extracts, later harvests and innovative winemaking. The house is set up for us with tasting stations in each room. We are welcomed by tasting single grand cru vineyard wines from various vintages at each stop. As we go around the rooms, Martin tells us about the rainfall that year, how the harvest went, what happened during the fermentation and how he feels the vintage is aging. Tasting white wines from 2001, 2003, etc we are seeing that these austere, minerally whites are just babies, but aging wonderfully.

We sit down for a formal tasting of new vintage wines and eat some of the best bread I have ever had. I can’t stop eating the basket of rolls. Klaus Wittauer is obsessed with a video promoting Austria and he literally comes to tears as we watch it for the fifth or sixth time. I admire his passion for the homeland and the video is great to watch (see below). After a dozen or more wines, it’s time for lunch. In a beautiful setting complete with candle 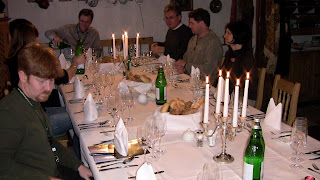 s and fine dining catering, under a giant antique wine press, we dine and drink the great Tegernseerhof wines. Martin is young and ambitious. He has brought on an assitant, Annika, to help make wine so he can pursue his ideas in the vineyards. As much as I enjoyed the wines, I am left wondering if customers are ready to pay for a single vineyard “Steinertal” Riesling 2002 from Austria. Baby steps, baby steps. For now we’ll stick to the T26 Gruner Veltliner and his rosé, both coming this spring. - Salamanzar